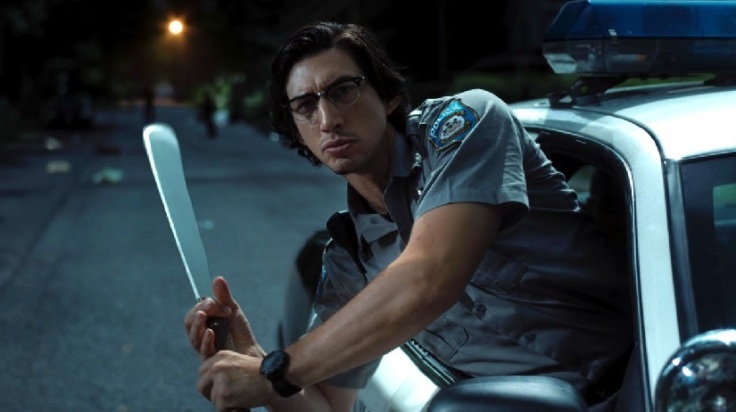 Jim Jarmusch’s zombie film is obviously a satire (I wonder: how many earnest zombie films are there?) but it is not obvious what, exactly, is being satirized.

Or rather, one of his targets is obvious and explicitly stated at the end of the film by the character Hermit Bob (played by Tom Waits), watching the devastation through binoculars from his leafy retreat. Bob muses that the undead were undead even while still living, having lost their souls to materialism. The film has already advertised this, so to speak; the zombies wander around Centerville muttering the names of consumer goods, and one nice shot shows a dozen or so lurching vacantly through the street holding their gleaming smartphones in limp wrists.

It is also an appropriate allegorical representation of our situation that the dead, past generations of these wanton consumers, come back to wreak destruction on the present and the future.

The film has divided critics. From one representative negative review whose headline accuses the film of being “lifeless”:

Jarmusch’s ultra-laconic, free-floating style has been well-suited in the past to such iconic indie films as Stranger than Paradise, Dead Man and more recent entries like Broken Flowers. But this attempt at a removed, laid-back view of a zombie apocalypse doesn’t succeed in the same way.

This seems to me to miss that the film is perfectly aware of its “lifelessness” and that this is even the point. But it is fair to ask what exactly that point is. (A bad film that is self-awarely bad is not thereby automatically a good film.)

One point, I think, has to do with our use of language and our grasp of reality, or lack of it. I was reminded of Terrence Malick’s Badlands, in which Holly (Sissy Spacek) thinks in the clichés of romance novels and bad TV. She thinks in these clichés, and it leads her to run off with a bank robber on a disastrous spree because it seems like a romantic adventure. In The Dead Don’t Die, the characters speak in banalities, the clichés of everyday life. They say what comes to mind, which is what people always say. Unless you are exceptionally urbane and witty, I would expect that much of the “flat” dialogue of the film is a not-too-exaggerated version of your daily dialogue (and mine). (This is why Google’s predictive text works.)

They speak literally, and they inhabit a literal world. Sometimes this is very funny, as when the three protagonists, local cops played by Bill Murray, Adam Driver, and Chloe Sevigny, show up one by one to the scene of the first zombie murders and ask, appalled at the carnage, “Was it a wild animal? Or several wild animals?” Or when a few teens of mildly rebellious dress and attitude show up in Centerville. The motel owner dubs them “hipsters from the big city”–Cleveland, the locals decide. One of the cops goes to warn them to stay indoors at night and reports back that the kids laughed and said ‘Yeah, we hear you have a zombie problem.’ The motel owner growls, “Those hipsters and their infernal…irony.” I think in both cases it is the literality–the factuality–that is funny here. One wild animal and “several” wild animals are distinct entities. “Hipsters” are a species, like cats or chickens, identifiable by distinguishing traits such as their “infernal irony.” There is what the Marxist would call a kind of total reification, whereby the social world seems perfectly natural, unalterable, opaque. Things are the way they are. And to each fact corresponds a typified, literal expression. (Poetry is unnecessary and alien to such a world–only Hermit Bob gets poetic, murmuring something about human mortality when he finds a copy of Moby-Dick discarded and half-buried in the forest.)

The undead are soulless consumers–now of human flesh–but the living are somewhat less than fully alive, too. They are types, as are we all sometimes, their thoughts and feelings imitations of what they’ve seen and heard from others and on TV–which doesn’t mean there’s no genuine feeling behind the typified expression, as when Mindy (Sevigny) finally loses it when she sees her dead grandmother reanimate, but the film never lets us take this quite seriously, because nothing and no one seem quite real.

It is this out-of-touchness with reality, the film suggests, that is responsible for this whole mess in the first place. The news anchor announces, in the same tone as everyone says everything else, that “polar fracking” has tipped the earth’s axis. She reports that some have claimed that this could have global catastrophic consequences. An energy executive is quoted as saying, without further argument, that’s not true and not to worry. It is a parody of public discourse, words skating on the surface with no connection to what is really happening and no recognition or acknowledgement of what is at stake.

But the film in its flatness also seems to be satirizing the very genre of “genre movie satire.” It is as if it has given up before it’s even begun; it often has the zombie-ish feel of going through the motions itself. This is what the negative reviews are reacting against–the sense of cynicism, the sense that the amateurishness is not the result of a carefully crafted parodic intent but of a weary lack of effort (“lazy,” “like he phoned this one in from the land of the undead“).

I don’t deny that the flatness was perhaps too flat, too pervasive. It could have been a better film, with more humor and unexpectedness–all of which there is just enough of to suggest how much more there might have been. (Like Tilda Swinton as a–very–foreign funeral home owner with samurai skills.) But my sense is that this weariness too has a point, whether or not it’s intentional–or successful. Interviews certainly suggest that the film is in earnest; as Chloe Sevigny says,

The turn at the end was very surprising as a viewer. Just from being on set and the deadpan kind of humor, I was surprised by that turn. And the sincerity of it, the weight of the situation. You could really feel his turmoil and existential angst over what’s happening. I know the environment and environmental issues weigh very heavy on his heart.

But Jarmusch knows that his zombie movie is not going to avert the catastrophe. It may be written in despair over the suspicion that, to paraphrase Auden, art makes nothing happen. There isn’t really an “outside” depicted in the film; Hermit Bob himself is a flat caricature, and Moby-Dick (in which a microcosm of humanity sails to its doom as a consequence of madness and inept mediocrity) has no part to play other than as an object in the mud symbolizing “culture.” (Like the waterlogged books the father finds in Cormac McCarthy’s post-apocalyptic The Road.) The script is already written. As Ronnie (who has read it) keeps saying, “This is going to end badly.” The film thus functions as a kind of negative image of the good, on multiple levels–within the film itself, and as a film. In a generous interpretation, both try to provoke us to think about what it would mean to be awake, and what it would take to wake us up.